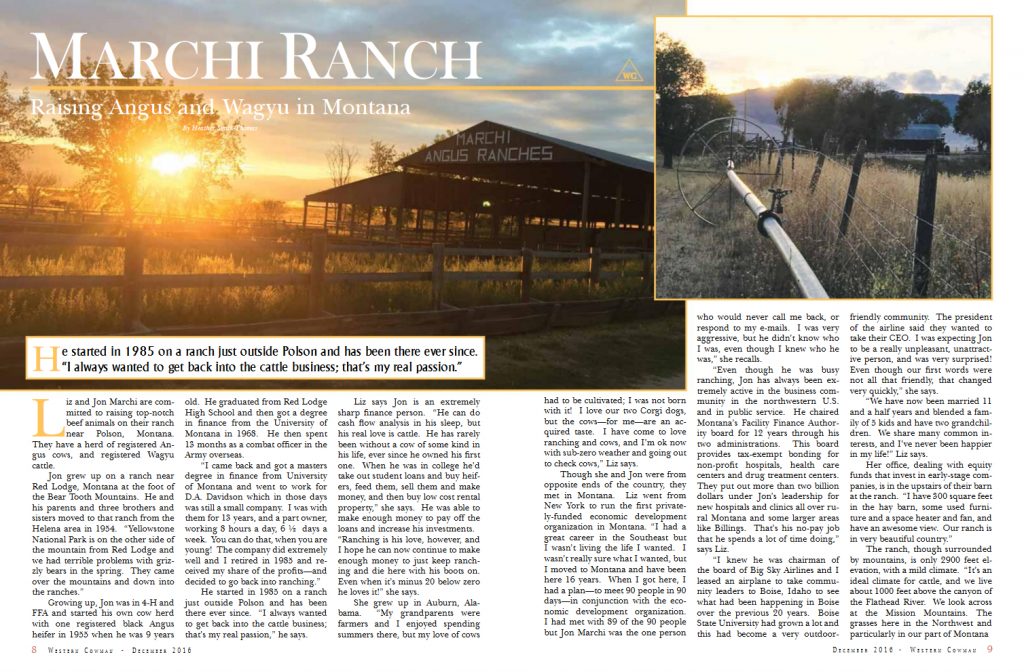 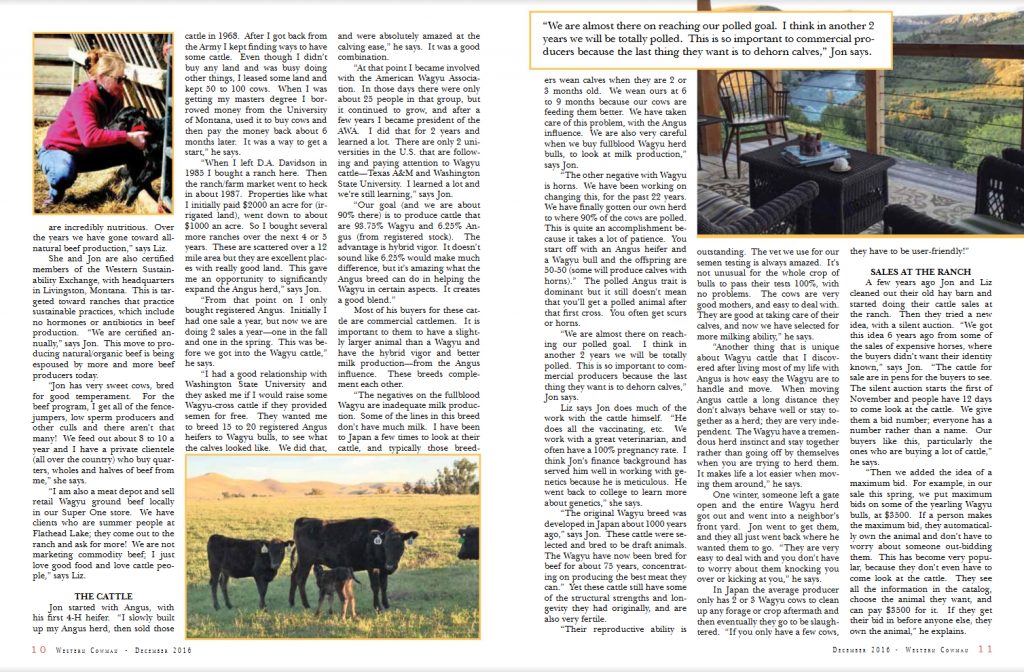 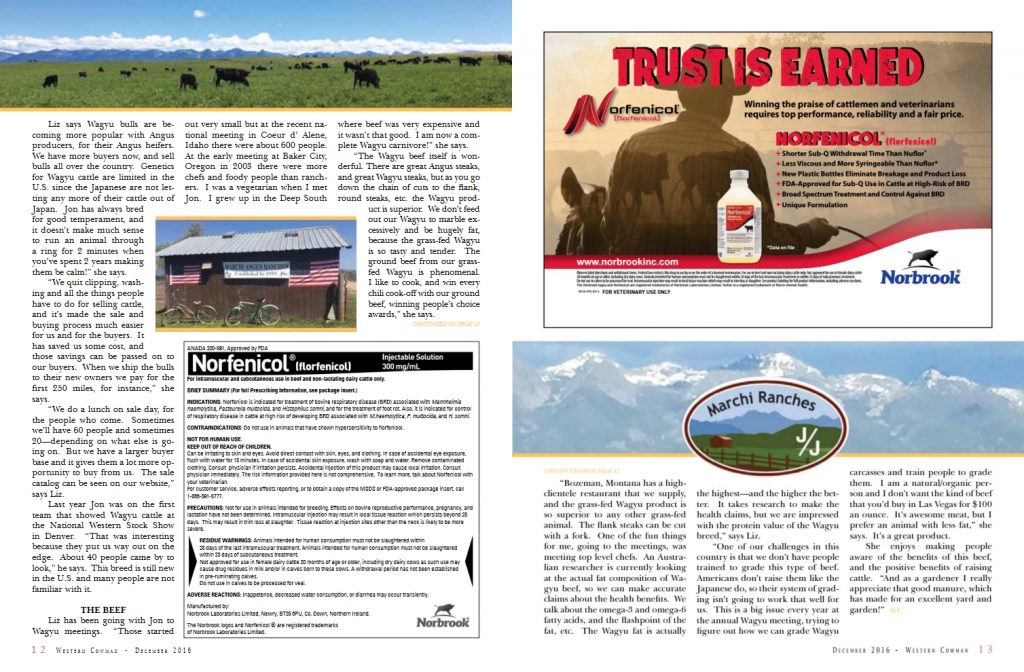 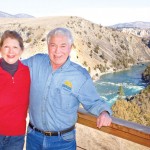 The tiny calf lay in a deep ditch in a field overlooking the Flathead River.

The calf’s mother loitered nearby, keeping watch on the calf as Liz Marchi stepped for a closer look. The calf had been born only hours earlier on Monday, and this was the first Angus calf born on the Marchi Angus Ranch this spring. There are dozens more to follow at their outfit that sits on a bench overlooking Buffalo Rapids on the Flathead River.

Liz Marchi was concerned about the location of No. 6, though, a calf that had been abandoned by its mother. She found it, stuck between the boards of a hay manger.

Being part of a cattle operation has been an unlikely transition for Liz Marchi, who not that long ago was more used to wearing Brooks Brothers business suits than jeans and boots covered in ranching slop.

Marchi came to Kalispell and the Flathead Valley to help create economic development through an organization called Jobs Now. She met Jon Marchi, who was then on the board of Big Sky Airlines, during a flight to Boise. She was immediately taken with the handsome stranger who sat next to her. She eventually moved to Polson with Marchi, who had already established three successful ranching operations in the Mission Valley: one in Pablo, Ronan and Polson.

The Marchi Angus Ranch raises Angus and Wagyu cattle. Wagyu are a captive Japanese strain that are bred for their excellent taste and marbling.

Jon Marchi knows a good breed when he sees one. Marchi grew up in eastern Montana and developed a fondness for farming and ranching at young age. In 1956 he won the Carbon County 4H Showmanship Award. The photo of him with two heifers shows a proud young man of 11 years. In the years since that photo was taken, Marchi also developed a fondness for business. Marchi earned a Masters in business at the University of Montana in 1972, and he worked for D.A. Davidson for several years. When it came time to move on from the brokerage business, he retired at age 39 and he started ranching in Polson.

He looks at the prime ranch land above the Flathead River like he might look at a business balance sheet. “This is incredibly productive agricultural land,” Marchi said. “You can grow anything here, with water. We’re lucky.”

One variable is the weather. A hard frost in June can kill the alfalfa crop, or high winds can destroy the corn crop, which they feed to their cattle as silage. The Marchis do not use hormones on their beef, and the alfalfa they feed their cattle is raised on their ranches in the Mission Valley.

Marchi knows how to look at cattle, too. He learned as a young man how to judge an animal, whether it’s a hog, horse or cow. “You watch how they walk,” he said. “How does he behave? Are his eyes clear? Does he look interested? I learned that as a kid.

“I can pretty much look at an animal and tell you what’s good about it and what’s bad about it.”

While Marchi attended to business indoors on Monday, Liz Marchi went about the ranch, tending to pregnant cows. Only one Angus had given birth as of Monday. One of the Wagyu cattle was born this week, and it wobbled in the barnyard before becoming stuck in the hay manger. Marchi trudged through the deep mud to retrieve the calf. “Come on out of there little guy,” she said, encouraging the calf. Marchi crawled on her stomach into the manger to retrieve the calf.

She emerged from the manger, hay in her hair, but content at her job. She prefers this work to high-end corporate affairs, although she does manage a venture fund for “angel” business investors out of a loft in the barn overlooking the ranch.

Liz helps out on the marketing of the beef raised on the Marchi ranch. The Marchis have many private clients who prefer the taste of their beef. “We have a fabulous product that cannot be duplicated in the local market,” she said. Liz researched local restaurants to see what they wanted, and she provides them with the right product. The meat is processed at Lower Valley in Kalispell, so they know the chain of treatment of their beef.

With cattle prices at record highs, this should be a good year for them. But Jon Marchi knows nothing comes easy in this business. “It is a financial challenge,” he said. “You have to be very careful. The key is to take very good care of your cattle. If you take care of them, they’ll take care of you.” 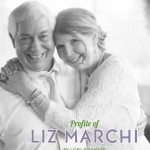 Marchi Angus Ranch is perched atop a river wild, where the frenzied Buffalo Rapids crash through the original canyon of the Flathead River, just outside Polson.
She married longtime cattle rancher Jon Marchi in 2005 and the pair run a herd of 225 Angus and I75 Wagyu cattle—the latter of which has helped propagate a rare breed of beef coveted both For its health beneﬁts and its buttery tenderness.

But For all those thundering hooves, it is also home base to Montana’s ﬁrst organized angel investment Fund.

Marchi came to Montana from North Carolina in 2000 to head a privately funded economic development corporation in the Flathead Valley. Her post enabled connections with many high net-worth investors, all of whom had private capital and had been seeding companies where proﬁts would be hard won.
At that time, opportunities for entrepreneurial funding here seemed Few and Far between. Banks lend on cash and collateral, and entrepreneurs have neither of those, so an angel investment group seemed a good next step.

In her economic development role, Marchi had been working with a company in Libby with a proprietary product extracted From the sap of the Larch (Tamarack) tree, and which eventually found purpose in the hands of hair and skincare giant Aveda.

“It was a traditional industry that Found a way to pivot and apply a natural product to a $9 billion nutraceutical market,” she says.

Marchi had heard that RAIN Source Capital CEO Steve Mercil received a large Foundation grant to seed capital in rural markets. She founded Frontier Angels as part of the RAIN Source network. Her ﬁrst Fund opened to investors in September of 2000.

Frontier Angel Fund, LLC closed in 2006 after raising $1 .75 million, and began investing in proprietary products and the entrepreneurs who Fueled them. The Fund made I9 total investments, she says, with I4 oF those still active. The fund’s ﬁrst investment was in a company called GenPrime, which developed a proprietary strip measuring yeast content in liquids, leading to a rapid scan drug test that took the company global. The United States Postal Service has used the GenPrime strip to detect the presence of anthrax.

They are a prime example, she said, of how entrepreneurs get into the marketplace and soon discover that their original ‘secret sauce’ idea becomes something else completely.

The fund also invested in Pacinian, which has been its best deal to date. The company’s tactic TouchPadTM technology helped broaden customer interface solutions by way of a razor-thin keyboard and has, so far, offered investors the greatest return on the dollar.

“We invested $250,000 for a stake in that company,” she says. Founded in 2004, the company was later purchased for $30 million, giving investors in the ﬁrst Frontier fund a great return.

A fund needs to have two or more of those type returns, she says, to be considered truly successful.

Angel investing isn’t just about fueling the dreams of big ideas, however. Marchi points out that it can also be the riskiest type of investment. Thus, it is also among the most regulated ensure only those that are ﬁnancially able, accredited investors assume the risk of loss.

“There are a lot of rules imposed by the Securities and Exchange Commission,” Marchi said. From the moment a fund attracts a ﬁrst investor to write a check, she says, the clock begins ticking and if the fund’s capital requirements aren’t met within a certain timeline, the money must be returned.

Stringent qualiﬁers, including speciﬁc net worth requirements, are in place to prevent average and other earners from losing their net worth in a single fund, and guard against predatory funders.

Investments target proprietary technology, such as software, chemical compounds, solutions to problems, and things that make life better. Angel investors don’t typically seed ideas. Products must already be developed and being used in the marketplace.

The fund ﬁnds investments through a variety of methods, including word—of-mouth recommendations from angels, ‘pitchfests‘, business incubators like The Launch Pad at Montana State University, at the University of Montana, or through other investment syndicates.

The Frontier Angel Fund II Web site says it will fund companies ‘With a desire and plan to scale and exit”—creating expedience and proﬁt. But for Marchi, it’s also about drawing global to Montana and its enterprise.

“We want to focus on wealth and wage creation,” she says. “We want that money to stay here in Montana.”

Software company RightNow Technologies, founded in Bozeman in I997 without initial venture capital, was purchased by Oracle for $ I .5 billion in 2O11. Marchi says it’s a great example of a company born here, which remains here, and continues to pay top wages that beneﬁt Montanans.

Marchi is among a growing number of women across the United States with both the capital and the business acumen to bank on entrepreneurial ventures. In 2O12 Forbes reported that women angels represented nearly 22 percent of the angel market – a signiﬁcant increase from 2011 ﬁgures of 12 percent.

“From the start, I was adamant about having women investors involved—it’s been a strong strategic focus of mine,” she says. Every fund across the United States agreed that having more than one woman in the room was important, she says.

Women are different decision—makers than men. Women also buy and value different products. ln Fund Two, Marchi says she has seen many more couples interested in angel investing and a number of couples who own units together and individually.

Frontier Fund II had its initial close in December 2O14. To learn more about the fund, or angel investing, contact Liz Marchi: liz@frontierangels.com.

Our next auction will be held on Saturday, November 8, 2014.